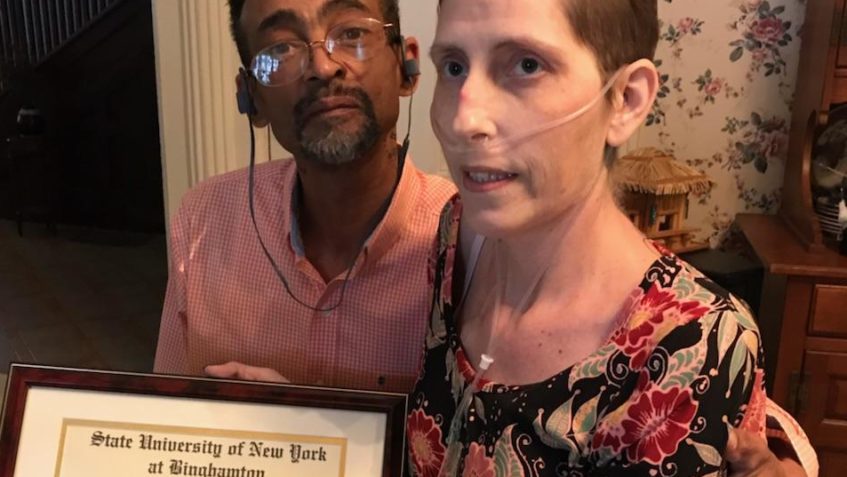 Laura Bess was admitted to Hospice on April 9, 2018. Originally, she was admitted in March, but revoked after being on our services for about a week, as she was going to try and seek more treatment for her cancer. During that initial admission, she told us how disappointed she was that she would not be able to graduate from Binghamton University with her Masters Degree to become a Nurse Practitioner.

After revoking her initial Hospice benefit with CareFirst, Laura went back to Roswell Cancer Center where she and her family discussed all of her options. She was readmitted to Hospice in April.

Paul Washburn and Melissa Joint admitted Laura, and Paul asked me if we could pursue getting the degree for Laura and wondered if we could do it as a surprise for her. We contacted the State University of New York at Binghamton’s Decker School of Nursing and was directed to the Director of the Graduate of Nursing Program, Dr. Nicole Rouhana. We had to have the patient’s name, so we sought permission from her husband as he wanted to pursue this for his wife, if it was possible. Dr. Rouhana worked very quickly and diligently – and within 48 hours was able to secure permission from the Dean of the University to give Laura Bess an Honorary Master of Science Family Nurse Practitioner Degree.

Social worker Jennifer Oyer made arrangements, with the assistance of Melissa Joint, RN and Patience Wulf, Director of Patient Care, to have Melissa Oakley, Family Services Manager, pick up the Degree from the University. Dr. Rouhana framed the Degree and stored it in a beautiful, decorative University of Binghamton gift bag, along with some cards, to give to Laura. With the help of friends, we scheduled a small ceremony to honor Laura’s hard work and to present her with the Honorary Degree from Binghamton University.

CareFirst staff members, Jenny Oyer, LMSW, Paul Washburn, RN, and Carol Warriner, RN, went to Laura’s home on April 13 at 9am to present her with the Honorary Master of Science Family Nurse Practitioner Degree from Binghamton University, along with a pink bouquet of flowers, to recognize her special accomplishment.

The Decker School of Nursing also offered Laura’s husband and family the opportunity to walk the stage at the Commencement Ceremony at Binghamton University in May.

Laura was dressed very nicely in her wheelchair, nails painted, as Carol Warriner, RNCM, presented her with the Degree. Laura’s husband was tearful and hugged and kissed his wife. Her parents were also present during this presentation.

It was a Wonderful Experience, and we’re so happy Laura Bess, NP, received her degree from Binghamton University!